Antiquarian Francis Douce (1757–1834) was a passionate collector of books. He initially trained in Law (as his father had before him) but preferred to focus his time on his scholarly interest in books and manuscripts. 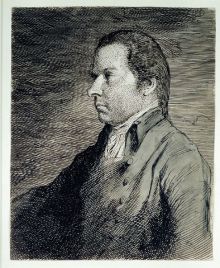 To this end he took the position of keeper in the Department of MSS at the British Museum in 1807. Unfortunately his tenure at the museum was not entirely without controversy and he resigned in 1811 after falling out with the trustees.

In his (infamous) resignation letter he listed 14 reasons why he had quit his post, including:

‘The coldness, even danger, in frequenting the great house in winter.’

‘The total impossibility of my individual efforts, limited, restrained & controlled as they are, to do any real, or at least much, good’

‘The want of society with the members, their habits wholly different & their manners far from fascinating & sometimes repulsive.’

‘The fiddle faddle requisition of incessant reports, the greatest part of which can inform them of nothing, or, when they do, of what they are generally incapable of understanding or fairly judging of.’

After leaving his post at the museum, Douce focused his efforts on building up his collection of antiquarian books and manuscripts and writing scholarly works, most notably Illustrations of Shakespeare and Ancient Manners (1807) and Dissertation on the various Designs of the Dance of Death (1833).

When Douce died in 1834 he left his vast and valuable book collection of over 19,000 printed works to the Bodleian Library in Oxford. Alongside this he bequeathed a mysterious chest to the British Museum with the strict proviso that it remain unopened until 1 January 1900.

Considering Douce fell out with the trustees of the British Museum, and indeed listed his dislike of his colleagues as one of the reasons why he quit, it seemed bizarre that he was now bequeathing that institution anything in his will. But perhaps we can take a clue from the fact that he asked for the box to remain unopened until over 60 years after his death – to me this indicates he still admired the institution but wanted to be sure no one he had previously worked with remained in post.

Curiosity about the contents of the chest was high but Douce’s wishes were respected and the box remained in storage until the designated date. You can just imagine the excitement on 1 January 1900 as the trustees gathered round, eager to get a first glimpse of the potential treasures within.

Accounts of what happened when the mystery box was finally opened differ, but a look at the British Library’s newspaper database reveals that the public were still clamouring to know, with letters to The Times requesting the British Museum to share what they found and numerous articles in regional and national newspapers in early 1900 speculating over the contents.

One article in the Yorkshire Herald from 10 February 1900 reported that the exact contents were still to be analysed but that:

‘It is generally understood amongst the frequenters of the Reading room and outside literary quarters that nothing from either a literary or antiquarian standpoint was found when the box was opened a few days since. Most of the papers and documents which filled the chest relate to subjects of archaeological import … but so far there is nothing to suggest the reason which induced Mr Douce to desire the chest be kept sealed and its contents unknown for so long.’

Interest in the chest thereafter appeared to wane and the contents was dismissed as nothing valuable, indeed it is thought that the British Museum did not even bother to catalogue what they found, so disdainful were they of its contents. Rumours later emerged that Douce had left a spiteful note inside the chest, as a sort of two fingers up to the British Museum from beyond the grave. But it seems likely this story simply grew up from the disappointing contents of the box and Douce’s antagonistic history with the museum’s trustees.

Despite the anti-climax it seems that although the British Museum saw no merit in the box’s contents the Bodleian Library did. In 1933 they requested that the chest be sent to them in order to reunite it with the rest of Douce’s legacy at the library and today it still resides in their collection. The mystery of its contents now partially revealed by the Bodleian’s catalogue entry for the box which states that it contains ‘Douce’s letters, papers, autobiographical memoranda, commonplace books and unpublished essays.’

Whether or not Douce intended the mystery box to be a trick on the British Museum is difficult to know for sure, but I suspect in fact he just had a slightly over-inflated idea of the importance of his own notebooks. Perhaps he hoped that leaving time to pass after his death would ensure anyone with a grudge against him would also have died, allowing his notebooks and papers to be analysed without bias. Unfortunately for Douce they were indeed analysed without bias, and from the British Museum’s perspective at least, were deemed of little value.

If you liked this post why not check out my books The Book Lovers’ Miscellany and A Library Miscellany.