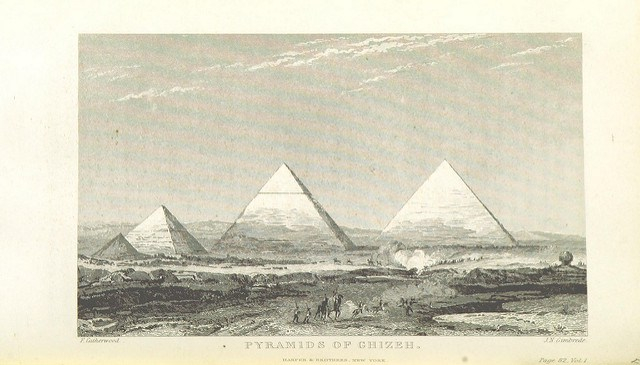 The mummified remains of Ancient Egyptians have always held a certain gruesome fascination but today the closest we are likely to get to one is looking through glass in a museum. Even the modern display of a mummy for educational purposes brings up certain ethical questions about our treatment of the long dead, and yet this prickly moral minefield all seems rather tame when we look back in time at how, since the tenth century onwards, these ancient bodies were treated and used as commodities.

Arab doctors began using the ground up residue from ancient Egyptian mummies for medicinal purposes around the tenth century. The reasoning behind this is fairly circuitous. Originally it was bitumen (also known as asphalt), a naturally occurring semi-solid form of petroleum, which was extracted from the ground in Persia and the Near East and used as something of a cure-all. However bitumen was a scarce resource and so alternatives were sought. The historian Abdel Latif, writing in the twelfth century, revealed that doctors had wrongly assumed that the blackened state of some of the decomposing mummies was caused by the use of bitumen in the embalming process. This assumption led them to believe that the use of ground up mummy itself could be substituted medicinally for bitumen. In the Persian language bitumen was known as mum or mumiya, and as a result ancient Egyptian preserved corpses became known as ‘mummies’ and suddenly they became a useful commodity.

By the sixteenth century a trade in mummies had flourished, with whole bodies or body-parts being dug up by peasants in the countryside and transported to Cairo. Despite restrictions being placed on the trade in mummies these were flouted (with the help of a few well-placed bribes) and the bodies were transported all over Europe for use in medicine. Francis Bacon and Robert Boyle both recommended using ground up mummy for treating falls, bruising or preventing bleeding. One trader, John Sanderson, wrote of a collecting trip to Egypt in 1486:

‘I broke of all the parts of the bodies to see how the flesh was turned to drugge, and brought home divers heads, hands, armes and feet, for a shew; we brought also 600 pounds for the Turkie Companie in pieces; and brought into England in the Hercules: together with a whole body: they are lapped in above an hundred double of cloth, which rotting and pilling off, you may see the skin, flesh, fingers and nayles firme, altered blacke.’

The supply of genuine mummies could not always be maintained and it was alleged that when the supply was scant, the desiccated sun-baked bodies of animals or people who had perished in the desert were at times passed off as mummy in their stead. 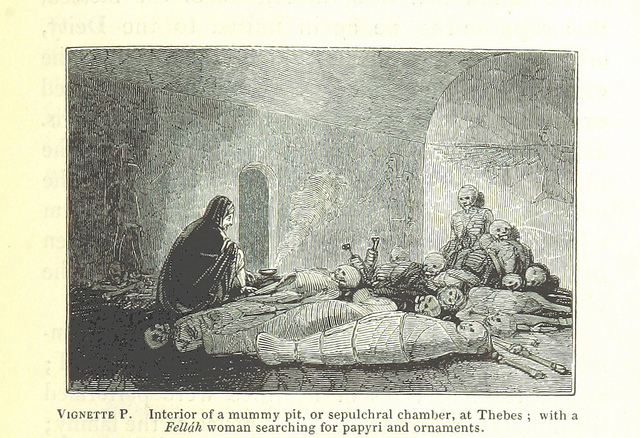 Mummy pit at Thebes from Manners and Customs of the ancient Egyptians by John Gardner Wilkinson, 1837 via The British Library

Mummia as it was known became an important part of the European apothecaries’ armoury of medicine in the sixteenth and seventeenth century. The bodies were ground up into powder and this was either applied topically onto the skin, or mixed into liquid and taken as a drink. By the mid eighteenth century the efficacy of mummia as a medicine was being questioned and it began to fade from use, although it was still available from some suppliers up until the twentieth century – in 1924 a kilogram of mummia was listed by German firm E. Merck for the price of 12 gold marks.

Aside from their medicinal purposes, mummies were also in great demand as curiosities, with whole mummies or embalmed body parts often the crowning glory of any cabinet of curiosity, combining as they did both natural history and human history. In sixteenth-century France a number of collectors held mummies, Boniface de Borilly (1587–1648), whose collection was kept at Aix, was said to have ‘four crocodiles, one very large, and three smaller. Diverse bodies petrified and embalmed. One foot and a leg of a mummy.’

However the conditions in European cabinets of curiosity were quite markedly different from the mummies’ original hot, dry resting places and antiquarian John Woodward (1665-1725) cautioned:

‘I myself saw here a mummy, brought formerly out of Egypt that, after it had been for some time in our more humid air, began to corrupt and grow mouldy, emitted a foetid and cadaverous scent, and in conclusion putrefied and fell to pieces.’

Sir Hans Sloane was said to have a mummy in his cabinet of curiosity in the 1730s but by the time his collection was gifted to the nation, forming the basis for the British Museum, the mummy was no longer part of the collection and it seems likely this may well have been due to decay.

The British Museum finally acquired its first genuine Egyptian mummy in 1756 and the Louvres Egyptian rooms opened in 1827 (furnished by Napoleon’s expedition to Egypt) marking the move from private museums and cabinets of curiosity to national museum collections. This would have allowed many more people to see an Egyptian mummy with their own eyes.

By the 1830s mummies became embroiled in a new type of spectacle – the mummy unrolling party. The supposedly ‘scientific’ gatherings took place across France and Britain and saw the great and the good assemble to witness the unrolling of an ancient Egyptian mummy.

This article from The Newcastle Weekly Courant from December 1889 provides a fulsome account of one such mummy unrolling that was held at the botanical theatre of University College London:

‘Mr Budge unrolled the mummy which was closely swathed in scores of yards of thick yellowish linen of fine texture … At the beginning of the process of unrolling there was a very perceptible sickly smell of aromatics, which as the work went on gave place to a more pronounced and decidedly disagreeable odour…When at last the coverings had been removed the body was found to have been of a very dark brown colour, so dark indeed as to be almost black. The skin, where it remained, was hard and shiny.’

The article, somewhat frustratingly, does not tell us what happened to the mummified corpse once it had been unwrapped but it can be assumed that it would not have survived for long uncovered. 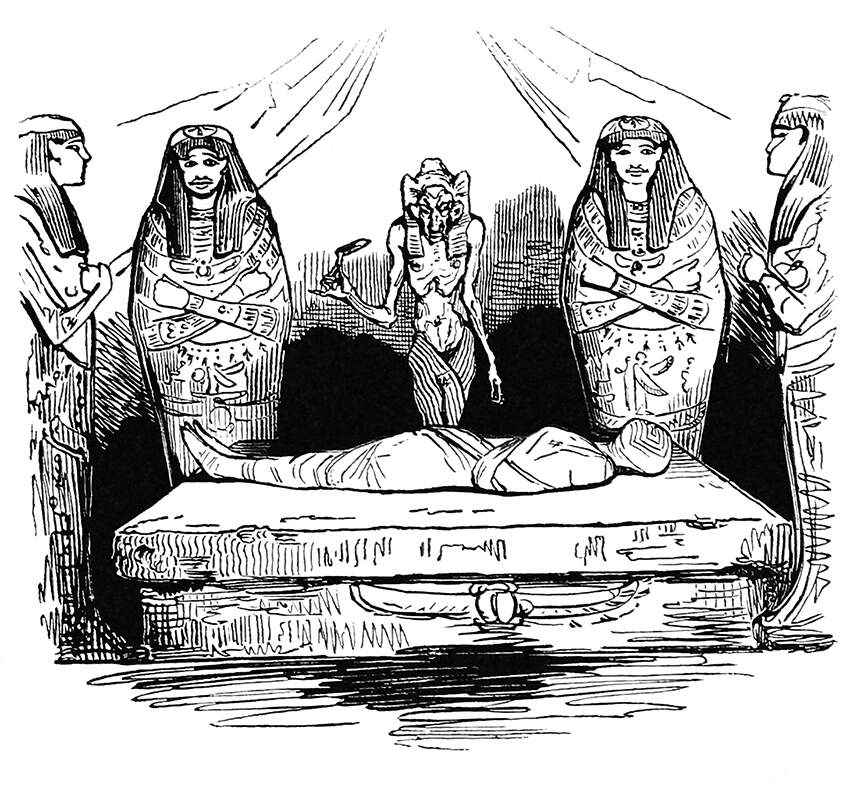 These public unwrappings no doubt provided fuel for Victorian ghost stories and encouraged the cliché of the revived, rampaging mummy that persists to this day. However as greater scientific rigour was demanded and the emphasis switched to the preservation of ancient artefacts the spectacle of mummy unrolling became consigned to the past.

But the indignity of the mummy did not end here.  Since the eighteenth century ground up mummy had been mixed with myrrh and white pitch to create a deep brown paint pigment, known as ‘Mummy Brown’ or ‘Egyptian Brown’. The pigment was most frequently used mixed as an oil paint and with a good level of transparency it was especially good for shading, shadows and, of course, flesh tones.

By the nineteenth century Mummy Brown was especially sought after and it was thought to have been used by Eugene Delacroix for his decoration at the Salon de la Paix at the Hotel de Ville in 1854 – although this was unfortunately lost to a fire in 1871. Pre-Raphaelite Edward Burne-Jones was also thought to have used the pigment and Art Historian Phillip McCouat reports that the artist’s wife, Georgiana Burne-Jones told the following anecdote revealing how shocked Burne-Jones was when he discovered the provenance of the pigment:

‘Edward scouted [scornfully rejected] the idea of the pigment having anything to do with a mummy — said the name must be only borrowed to describe a particular shade of brown — but when assured that it was actually compounded of real mummy, he left us at once, hastened to the studio, and returning with the only tube he had, insisted on our giving it decent burial there and then. So a hole was bored in the green grass at our feet, and we all watched it put safely in, and the spot was marked by one of the girls planting a daisy root above it.’

Ultimately Mummy Brown fell out of popularity as its exact colour could not be relied upon due to the varied nature of its source material and so was replaced by more stable pigments.

From commodity to museum specimen

By the early twentieth century the ancient Egyptian mummy had been through a number of incarnations as a commodity to be exploited by Europeans from medicine through spectacle to pigment. The development of museums and the increased interest in preserving the past meant that by the mid-twentieth century the unregulated trade in mummies finally became a thing of the past.

If you enjoyed this article take a look at my book How to Skin a Lion for more fascinating outmoded practices.

One thought on “The Strange Afterlives of Ancient Egyptian Mummies”