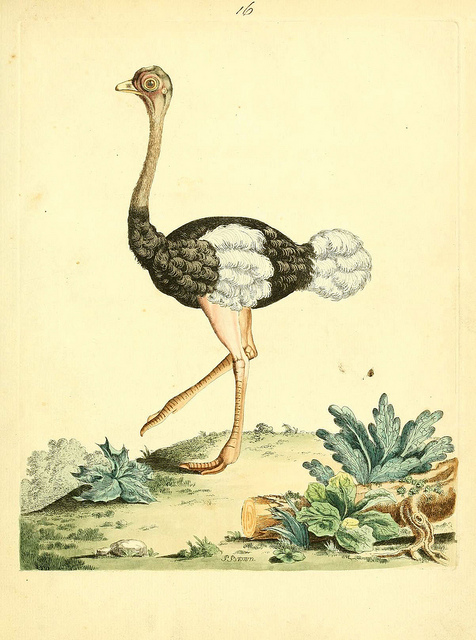 At the Duke of Wellington’s funeral in 1852, the enormous hearse was pulled by twelve black horses, each sporting a dramatic plume of prime black ostrich feathers. The feathers harked back to traditional medieval baronial funerals and their inclusion in the spectacular parade, which was witnessed by 1.5 million people, was hugely influential on Victorian funereal customs. The fashion for ostrich feathers ultimately dripping down through the classes, becoming an essential element of ‘respectable’ Victorian funerals. 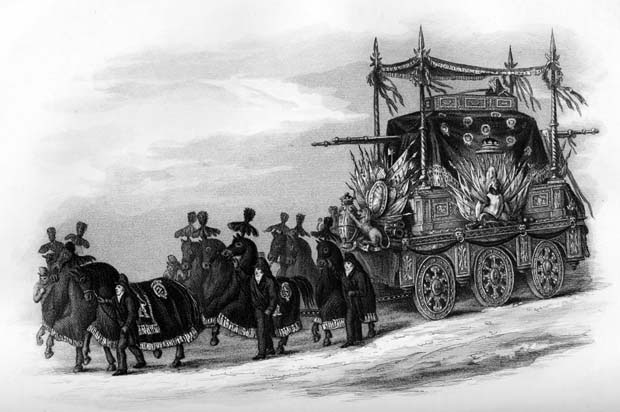 Funeral car at the Duke of Wellington’s funeral, 1852

Before the 1860s all of the ostrich feathers that reached Britain were taken from wild birds, slaughtered during a hunt. Across the Sahara and in South Africa where the birds were common, riders on horseback would hunt down the birds, kill them and pluck their feathers. These feathers would then be bundled up, transported by camel caravan to North Africa and then shipped into France or Italy and then on to London where they would be sold.

The demand for feathers was so high that concerns were raised that ostriches would be hunted to extinction, like the dodo before it. This scarcity only served to make ostrich feathers yet more desirable. 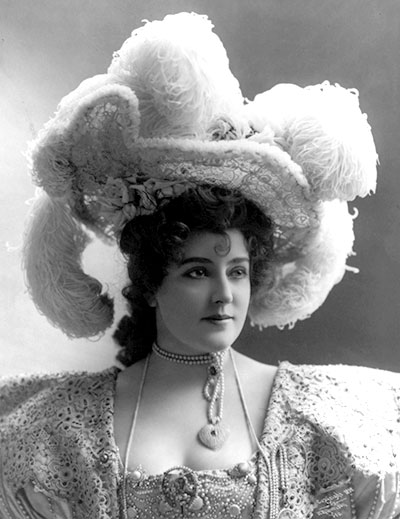 In the 1860s the French Court began to wear ostrich feathers on hats, as trim on dresses, as jackets and boas. The feathers could be dyed any colour of the rainbow and added exoticism and luxury to any outfit. Naturally where Paris went, the world followed and soon the demand for ostrich feathers outstripped supply, lending them yet further cache.

Due to the value of ostrich feathers some canny colonial farmers at the Cape in South Africa saw an opportunity. If the ostrich could be domesticated and farmed they would have a ready supply of feathers which could be plucked from the bird without harming it and regrow anew. The first experiments began in the region of Oudtshoorn and by 1865 they had found some success with 80 domesticated birds.

The problem was the safe rearing of ostrich chicks — the ostriches tended to get spooked and destroy their own eggs, or simply fail to incubate them properly, leading to a difficulty in expanding the number of domesticated ostriches. This problem was solved in 1869 when Arthur Douglass, a pioneering ostrich farmer and the first to list ostrich farming as his sole occupation, invented the ostrich incubator. 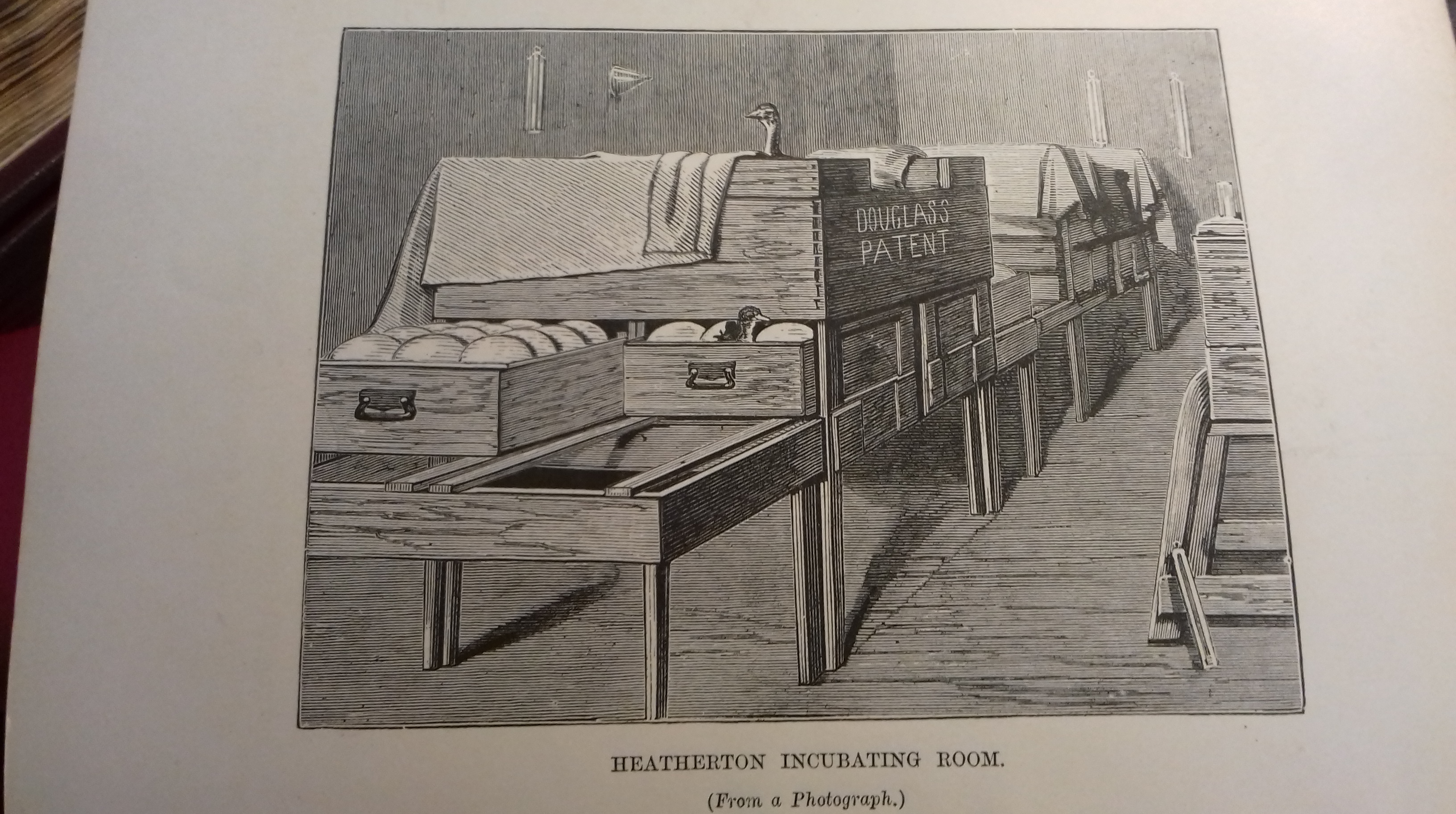 This technological leap allowed farmers to safely hatch numerous chicks, greatly expanding their flocks and by 1875, there were 20,000 domesticated ostriches in the Oudtshoorn region alone.

After the success of these early farmers many colonists at the Cape switched from sheep farming to ostrich farming, the returns at this point seemingly much better and the conditions in South Africa proving ideal. By the 1880s ostrich feathers had become South Africa’s fourth largest export after gold, diamonds and wool.

Each ostrich could provide two crops of a feathers a year, the feathers being plucked or cut from the birds would then regrow. Each bird gives 1 lb of feathers on plucking — 50 quill feathers (with about four fancy-coloured in each wing), plus 75 to 100 feathers in the tail and 6 ounces of drabs.

Port Elizabeth flourished with the new trade, as the money raised from taxes levied on the export of the feathers allowed new municipal buildings to be constructed. Many made their fortune from the trade and they built huge, luxurious houses, known as ‘feather palaces’ with the spoils.

London was the hub of the ostrich feather trade. Huge crates of sorted feathers would arrive each week from the Cape plus a smaller number still traded up the caravan routes from wild Saharan birds.

Warehouses at Cutler Street and Billiter Street in East London displayed the sorted feathers for merchants to inspect before they were sold at monthly auctions in commercial sale rooms in Mincing Lane.

Ostrich feathers on display at warehouse

The feathers were sorted and washed at the Cape before being transported and would be displayed at the warehouses divided into classes of feathers. Some of the feather classes included:

Merchants would inspect the feathers before the sale and then bid for the lots of their choice. These merchants would then sell on their feathers to manufacturers where they were dyed, curled and layered up and sewn together to create plumes. The industry supported not just the farmers at the Cape but the merchants plus numerous artisanal trades people (often young women) who processed the feathers before they reached the retailers.

Page from manual on how to dye ostrich feathers

Initially prices remained high with a one sale in October 1882 seeing Prime Whites go for between £22 and £26 per lb, however before long as ostrich farming grew in popularity, the market began to get flooded with feathers and as a result profits fell.

The fashion for wearing feathers continued and between 1870 and c.1885 London was the very profitable hub of this burgeoning industry, selling feathers on to France, Germany and America.

However the glut in feathers began to tell after 1885 and prices began to drop as this once scarce and exotic commodity became plentiful. Many ostrich farmers went out of business and numerous speculators out in the Cape who had invested in the new craze went bust. Some farmers battled on but the industry heard its death knell in 1914.

The over-supply of feathers, the changing fashion, the introduction of the automobile which meant flamboyant headresses were no longer practical, and the outbreak of World War One all played their part. Farmers were suddenly faced with huge flocks of ostriches with no discernible value. Many were slaughtered for pet food and efforts were made to market the meat for human consumption and the leather as a fashionable alternative to traditional leathers, and this met some success.

Ultimately however the ostrich feather had fallen out of fashion and the days of the enormous ostrich farms of the Cape, the monthly auctions and the inflated prices were over. The majority of ostrich farms went back to sheep or goat farming, the provision of wool and mohair seemingly less subject to the fickle fancy of fashion.

All other pictures from Ostrich Farming in South Africa by Arthur Douglass (London, 1881) photographed by me.

3 thoughts on “The Victorian Ostrich Feather Trade: Boom and Bust”