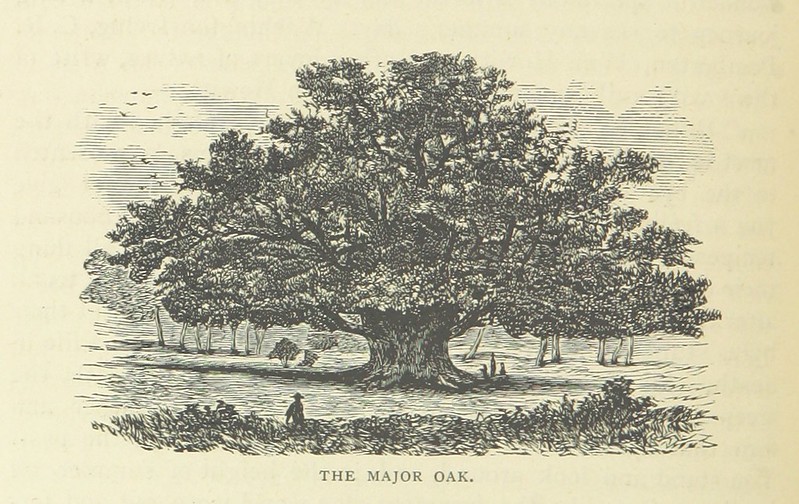 Trees have long been important to humans. Not only do they provide firewood, offer shelter and make useful waymarkers but they were also often at the heart of sacred spaces, providing a place for people to gather and worship. This association with religion continued on into more modern times when many churches were built next to ancient holy trees (see my blog post on Yew trees and graveyards for more on this). The close relationship between humans and trees is reflected in folklore and there are many beliefs in the powerful properties of trees and their wood. In certain cases this affinity between trees and people has been taken further with a belief that some trees have an especial sympathy with the family or locale that they overlook and that the health of the tree will reflect the health or luck of those connected with it.

In Britain the elm tree seems to have been especially often thought of as conducive to sympathetic magic. This is probably because elms are prone to suddenly and without warning dropping a branch leading to them being labelled as ‘treacherous’ trees as they are liable to injure or kill someone sheltering under their branches. It seems this habit of shedding branches led to some families believing that an elm tree on their land reflected the health of their family. This was the case in nineteenth-century Credenhill in Herefordshire where an elm tree in the grounds of Credenhill House, the family seat of the Eckley family, was nicknamed the ‘Prophet Elm’ as it supposedly shed a branch every time a member of the family died.

Similar powers were reported about Darrell’s Tree, another elm which grew in the grounds of the Elizabethan Littlecote House in Wiltshire, which was said to flourish or demise with the fortunes of those resident in the house. (As an aside there is a terrible story which you can read more about here about ‘Wild’ Will Darrell who in 1575 lived at the house and supposedly cast his baby born of incest into a fire in an attempt to cover up his crime!). The health of another elm which stood in the churchyard in Hinton on the Green was said by the locals to be linked to the incidence of male births in the village – as long as the tree flourished so too would many boys be born. The tree in this case becoming a sort of fertility totem for the village.

This link to the health of a particular region or family is not unique to elm trees. Jacqueline Dillion reports that a number of the ancient oaks at Bradgate House, the birthplace of Lady Jane Grey, suddenly died after she was beheaded in 1554.[i] Other sources instead report that rather than the trees dying in sympathy, it was the foresters at Bradgate House who ‘beheaded’ the trees on the death of their mistress in a show of respect. Whichever report is the truth it demonstrates once again the enduring belief that a tree can (or should) reflect the fortunes of a family.

At Bretby Castle in Derbyshire a cedar of Lebanon brought to England and planted in 1676 (and thought to be the first cedar in Britain) was said to drop a branch every time the head of the Chesterfield family died. The tree lived for hundreds of years and was finally felled in 1954 after it was deemed unstable. Old chains holding up the branches reveal how seriously the family took the health of the tree and demonstrate their efforts to stop the branches from falling.

Barkston Ash a small village in Yorkshire is named after its special tree. An ash tree has stood at the centre of the village (and was said to mark the centre of Yorkshire itself) for hundreds of years with the current incarnation planted in the 1980s. The health of the tree is thought to reflect the fortunes of the village. Another bit of local lore says that anyone who spits on the tree would be struck by lightning a year and a day later.

The sympathetic link between trees and people is not only linked to specific families or places. In Italian folklore it was believed that bay trees could mirror the fortunes of the local community. If a bay tree outside your house was healthy and vigorous then so too was the family within the house. However if the tree sickened and withered then so too would the family. This idea was then extrapolated to a whole region and it was said that if all the bay trees in the country died then this would foretell a national emergency such as the death of the ruler[ii]. A similar belief is held about myrtle bushes in Wales. It is said that myrtle bushes should be planted either side of the front door to bring health and happiness to the house. However if the bushes are not well-cared for and begin to wither then they will attract bad luck. This link between the fortune of the family and their efforts to tend to the bushes seems to promote an affinity for trees and plants – as in you look after the tree and it will look after you.

This empathy between trees and people extended further into numerous folk cures. For example, in Britain sickly people were advised to walk round and round a healthy oak tree as the tree was thought to absorb the illness leaving the patient in good health. Similarly a cure for warts was to rub the offending area with bacon and then tuck the bacon behind the bark of an ash tree. The implication being that the tree would draw in the affliction, leaving the patient blemish free. In Cambridgeshire anyone suffering from a hernia was advised to be passed through a split ash sapling. After the person had been passed through the spilt, strong twine would be used to bind the sapling together and it was thought that as the tree healed itself so too would the patient[iii].

The idea that a tree might mirror the health of a family, promote fertility or cure an illness demonstrates the long-held idea that trees have a protective function. This is seen in numerous cultures where either a certain species of tree or the wood from that tree are used to offer protection to a household. In Britain birch trees were often planted near the door of a house as they were thought to repel evil spirits and should a witch attempt to enter your house she would be irresistibly distracted by counting every single leaf on the tree[iv]. Willow branches were hung over windows in China as they were believed to keep ghosts at bay and a similar belief was afforded to fir tree branches in Native American Salish tradition. Across Europe the rowan was also believed to have protective properties and some would weave the branches into the rafters of their house to guard against fire.

The reassuring solidity and longevity of trees has meant that they have become symbols of protection in many cultures. The idea that trees might reflect our own health and mortality then encourages us to take greater care of the trees around us.

[ii] The Cassell Dictionary of Folklore by David Pickering, Cassell, 1999

[iv] The Cassell Dictionary of Folklore by David Pickering, Cassell, 1999

5 thoughts on “Trees and Sympathetic Magic”