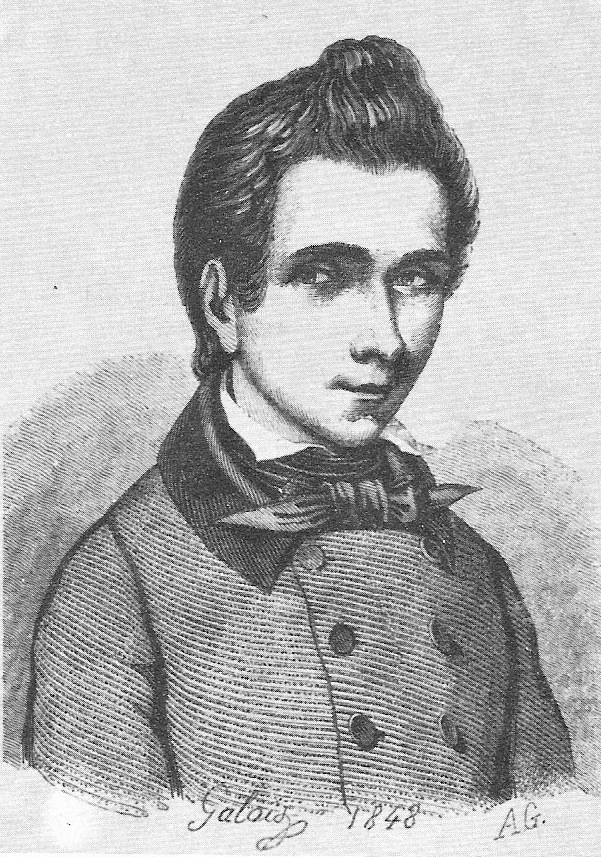 The Last Words of Evariste Galois

Evariste Galois (1811–32) was an extremely promising French mathematician however a series of strange events and a tragic early death would conspire to obscure his talents for many years.

Born in Bourg-la-Reine near Paris, France in 1811, Evariste’s father was Nicolas-Gabriel Galois, the village

Evariste Galois by his brother, Alfred

mayor. From the age of twelve Evariste attended the lycée of Louis-le-Grand in Paris, but it was a time of great upheaval at the school and many pupils were expelled and the quality of the teaching greatly suffered. Evariste began to tire of his studies, all except for mathematics, for which he developed a precocious talent.

At the age of fifteen, Evariste was already studying the original papers of the celebrated eighteenth -century mathematician Joseph-Louis Lagrange. He began to focus only on mathematics to the detriment to his other studies and despite working at a very advanced level in maths (he studied Leçons sur le calcul des fonctions which was aimed at professional mathematicians) he twice failed to secure a place at Paris’ prestigious École Polytechnique and much to his bitter disappointment instead went to the more modest École Normale. Here he continued to excel at mathematics and was able to make some very complex leaps of logic, however in his other studies he was unusually weak. His literature examiner remarked of his exam:

‘This is the only student who has answered me poorly, he knows absolutely nothing. I was told that this student has an extraordinary capacity for mathematics. This astonishes me greatly, for, after his examination, I believed him to have but little intelligence.’

At the age of just eighteen Evariste began publishing papers, one on continued fractions made it into Annales de mathématiques but another paper on the solvability of algebraic equations which he submitted to the French Academy of Sciences was lost and never published. Evariste’s disappointments were compounded by the tragic death of his father who, depressed by political infighting, committed suicide. His father’s death deeply affected the young Evariste and understandably caused him to behave somewhat erratically on occasion and become more engaged in political causes.

In 1830 Evariste re-wrote the lost paper he had previously submitted it to the French Academy of Sciences to be considered for the Grand Prix of the Academy in Mathematics. However in a strange quirk of fate his paper was lost once again as he gave it to Jean-Baptiste-Joseph Fourier who took it home but unfortunately died a few weeks later and the paper was never found amongst his things.

Evariste was by now becoming increasingly political and in 1830 he penned a pro-Republican letter which got him expelled from the École Normale and he was twice arrested and once imprisoned for six months for his stridently Republican views.

In 1831 Evariste, demonstrating quite some determination, for a third time re-wrote his piece on the solvability of algebraic equations and again submitted it to the academy. This time it was read but received a negative critique – which modern mathematicians have subsequently suggested was simply because they failed to follow his advanced and original thinking and falsely presumed his theories to be wrong.

On 30th May 1832 twenty-year-old Evariste Galois took part in an ill-advised duel, the reasons for which are murky but some have suggested it was staged to resemble a police ambush, others have indicated that it was over a woman, Mademoiselle Stéphanie-Félicie Poterin du Motel. What we do know is that the night before the duel Evariste was aware he might not survive and so stayed up all night, feverishly writing out his many mathematical ideas, which he then sent to his friend, Auguste Chevalier.

His theories safely committed to paper, Evariste met his opponent but was shot in the stomach. Hours later a peasant discovered his prone body and he was taken to hospital where he managed to relay some tragic last words to his dear brother, Alfred:

‘Don’t cry. I need all my courage to die at twenty.’

Galois’s papers were annotated and posthumously published in 1846. These ideas and conjectures were built upon and refined by fellow mathematicians Joseph Liouville and Camille Jordan and have gone on to form the basis of group theory, finally bringing the brilliance of Evariste Galois to light.