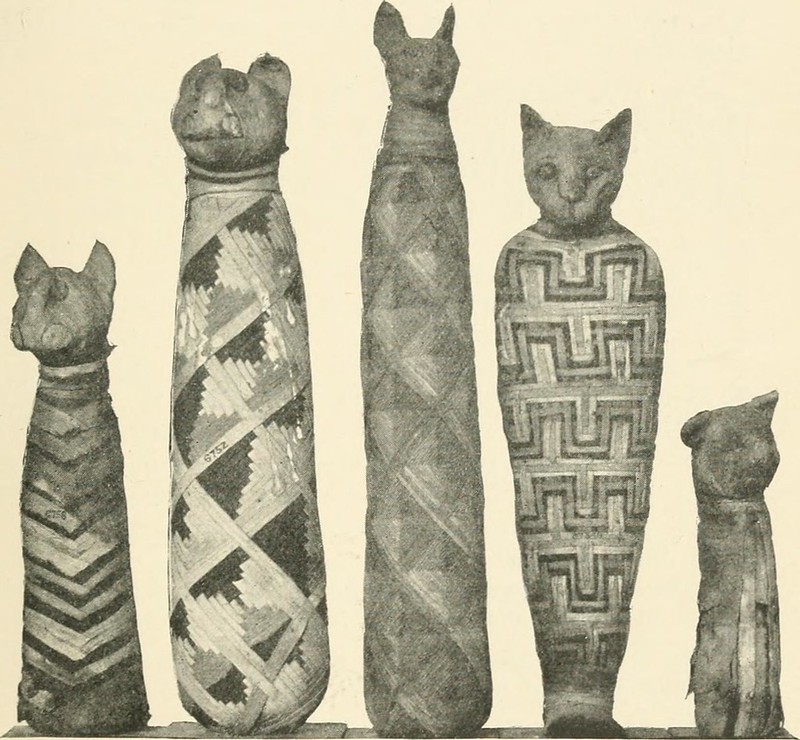 Animals have always been hugely important to humans – as food, as beasts of burden and as companions. The archaeological record has offered up some fascinating animal burials from all over the world which reflect the importance of our animal friends but have frequently posed more questions than they answered. Below are seven fascinating animal burials which have puzzled archaeologists:

In 2015 a series of graves were discovered in Winterborne Kingston in Dorset, England in which Iron Age peoples had seemingly buried together the remains of separate species. Archaeologists suggested this could have been an attempt to create mythical hybrid beasts. The graves revealed a cow which had been sacrificed but its legs had been replaced with four horse’s legs; a sheep with two heads – its own and a bull’s head; and a horse with a cow’s horn placed at its forehead.

The archaeologists from Bournemouth University also uncovered two jawless cow’s skulls which had the lower jaw replaced with the jawbone of a horse. The most intriguing burial was of a young woman, who it was suspected was sacrificed due to evidence her throat had been cut. She was laid on a bed of animal bones, with her head resting on a mixture of skull bones from sheep, cows, horses and dogs plus animal leg bones were placed underneath her legs as if mirroring her own body.

It is not clear why these hybrid burials occurred but the archaeologists have suggested it could be as an offering to increase the productivity of the animals – for example the horse buried with the head of a cow may have signified a wish to increase the fertility of the herd. You can read more about this fascinating dig known as the Durotriges Project here.

The carefully buried remains of a porpoise were discovered at a 14th century site on an island called Chapelle Dom Hue off the coast of Guernsey. Archaeologists have puzzled over the strange remains, as although porpoise may have been eaten at that time it is unclear why the solitary monks on the island would chose to give the animal a careful burial rather than disposing of its remains in the nearby sea.

One theory put forwards by the archaeologist leading the dig Dr Philip de Jersey was that rather than being given a religious burial the porpoise was carefully placed in a pit full of brine in order to preserve it for food but it was somehow forgotten.

It is well known that the ancient Egyptians buried mummified animals as offerings to the gods, but researchers were recently surprised by a CT scan of a crocodile mummy from the 1st century BC. The scan revealed that the package in the shape of a mummified crocodile actually contained the skulls of four crocodiles arranged to give the shape of one single crocodile.

The mummy belonged to the Museum of Manchester and underwent a CT scan as part of the research project Ancient Egyptian Animal Bio Bank. This research scanned and examined numerous mummified animals held in museum collections all over the world and uncovered the fact that only one third of all the animal mummies scanned contained the remains of just one animal. Some mummies contained no animal matter at all and although on the outside resembled an animal, they were in fact constructed from mud, sand and plant materials.

Archaeologists uncovered the mummified remains of over 40 dogs buried with blankets and food in Peru. This is thought to be the only case of dogs being afforded such status in burial outside Egypt. The remains date from 900–1350 CE and were so well-preserved because of the desert conditions in which they were buried. Researchers think that these dogs were especially important because they herded the llamas on which the Chiribaya people depended for food. Analysis of the remains, which resemble small golden retrievers, led the researchers to name the breed Chiribaya Shepherds. Work continues to try and establish if this was a breed native to South America.

In Berenike on the Red Sea coast of southern Egypt a site has offered up the remains of over 100 carefully buried animals in what is thought to be one of the earliest known pet cemeteries. The site dates from 75–150 CE and unlike other animal burials from Egypt these animals were not mummified. The majority of the burials are cats, which is no great surprise as Egypt was one of the first countries to domesticate the kitty. Other animals found in the cemetery include monkeys and dogs. Researchers concluded that these animals were pets because there was no evidence of sacrifice and little evidence of disease, implying they were well looked after.

During the excavation of part of the Roman town at Towcester near Northampton in England a strange dog burial was uncovered. The small lap dog had been carefully buried in a grave but its head had been removed and placed by its back feet. To modern eyes it would seem cruel to mutilate the body of a beloved pet thus, however evidence from contemporary Roman burials suggests this was not an uncommon practice among human burials. A site at Great Whelnetham, Suffolk revealed 40% of the burials in the Roman cemetery had been decapitated and the head laid by their legs. The significance of head removal is not yet understood but that a pet dog was treated in the same fashion as humans suggests it was an important companion.

A mass grave containing 145 horses was uncovered in 1964 in Shandong Province, China. The beasts were buried in a pit 215 metres long and had been sacrificed. A further dig years later uncovered further horse skeletons, bring the total found to 251. The horses were killed and buried alongside the grave of Duke Jing the ruler of the State of Qi (547 to 490 BC). Researchers think the animals were mostly young horses, aged between 5 and 7 years old. They were drugged with alcohol before being clubbed over the head.

Archaeologists estimate that there were in fact about 600 horses buried in a square arch around Duke King’s tomb making it by far the largest horse burial uncovered in China. Excavations continue but so far some 40 dogs and 2 pigs have also been unearthed. Sources suggest that Duke Jing loved horses so it is assumed that the sacrifice of so many animals was a great honour.

Porpoise: The Half Hour Library of Travel, Nature and Science for young readers, 1896 via The British Library

Cat mummies: A guide to the third and fourth Egyptian rooms : predynastic antiquites, mummied birds and animals, portrait statues, figures of gods, tools, implements and weapons, scarabs, amulets, jewellery, and other objects connected with the funeral rites of the ancient Egyptians, 1904 via The Internet Archive

Horse: On the Domesticated Animals of the British Islands by David Low, 1845 via The British Library