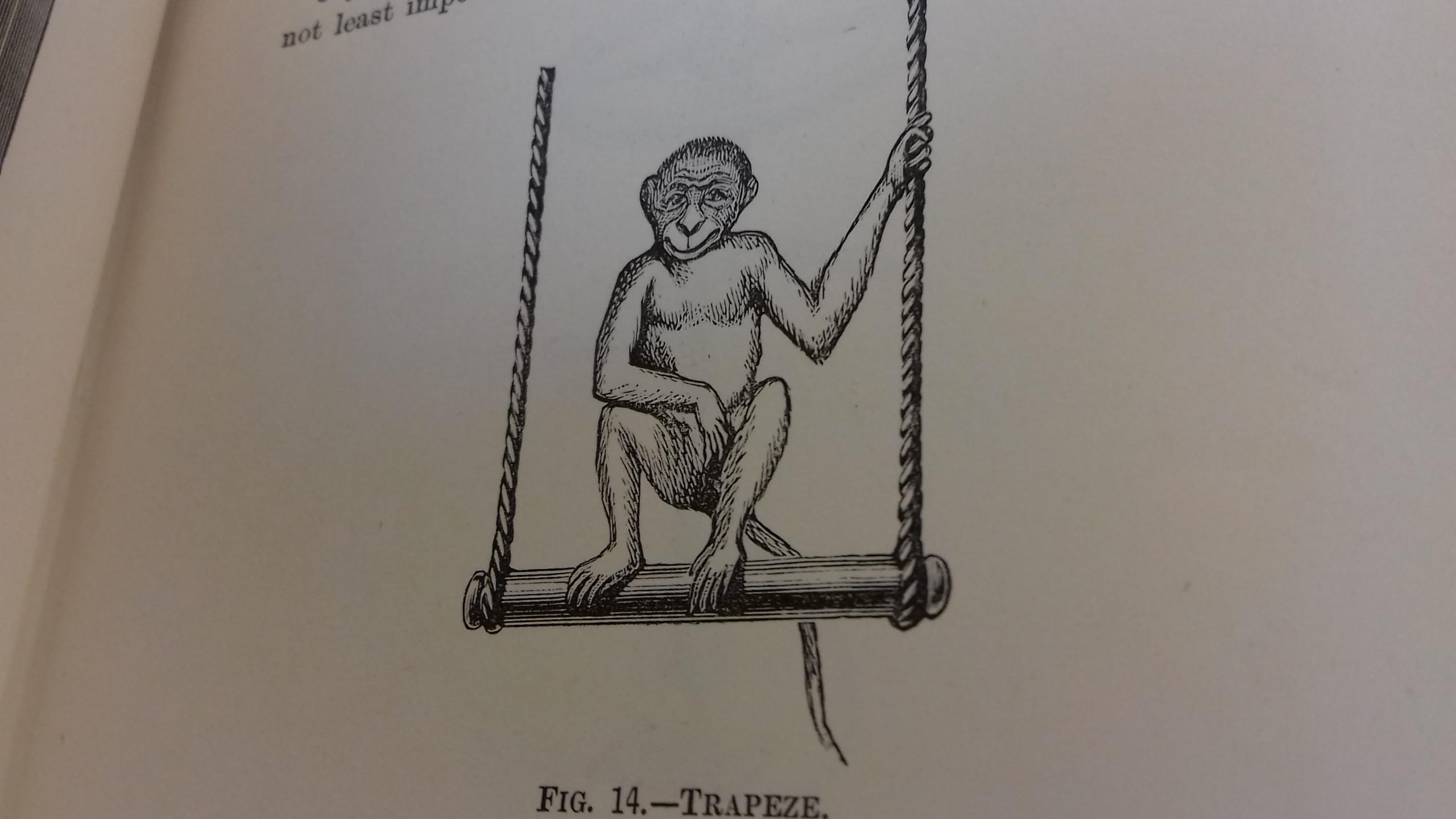 The Victorians and Pet Monkeys

‘Monkeys are not very agreeable domestic pets, as they are extremely fond of mischief, and are very frequently vicious and spiteful to children.’ So wrote Mrs Loudon in her 1851 pet-keeping manual Domestic Pets their Habits and Management. Despite views such as these, in the Victorian era monkeys proved to be popular pets.

Notes on Pet Monkeys and How to Manage Them by Arthur Patterson (London, 1888) advises that that the chief importers of monkeys to Britain were Cross, Carpenter, and Johnson of Liverpool or Jamrach and Abrahams of London. Monkeys were brought to Britain by sailors or dealers alongside traditional cargo from South America, India and south east Asia. Patterson’s book includes a price list for various breeds of monkeys, revealing that marmosets could be had for 15 shillings whereas an orangutan could be as much as £100. 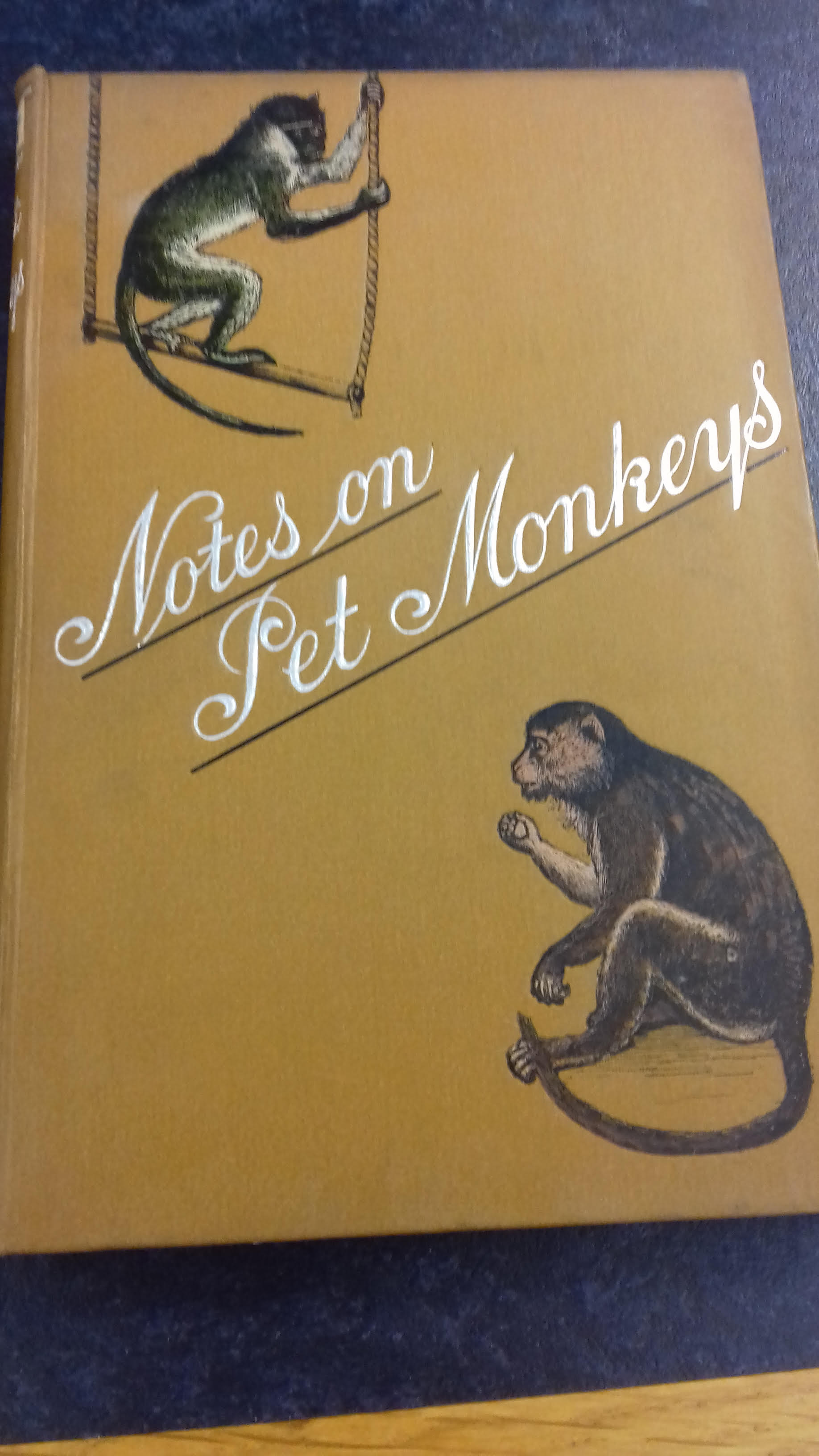 Patterson recounts an anecdote on how wild monkeys were said to be caught in Brazil:

Some fanciful yarns are told, how that the natives repair to the vicinity of the haunts of the monkeys with pots of water, and also some containing an equivalent to glue. They begin washing their faces, turning the water out, and leaving the other. Upon retreating, down come the imitating monkeys, and pitch in for a wash with the gum. Of course their eyelids become fastened together, and the wretched animals are taken an easy prey.

Numerous monkeys were trapped and shipped to England to be sold at the docks or via exotic pet shops, their expensive price tag ensuring they were the preserve of the rich. An exotic pet monkey was highly desirable to the Victorians and Patterson sums up their allure: ‘A more comical and entertaining pet cannot possibly be kept, if but under proper control; and you have a fertile source of never-ending drollery at your disposal.’

‘The right place for a monkey, in civilised society, is in a cage.’  So says Patterson, going on to point out that leaving a monkey to live loose in the house like a cat or dog is folly, stating that soon the whole house will be in ‘uproar’. Many people kept their pet monkeys on a barrel and pole – this involved a long wooden pole for the monkey to climb with a barrel with a hole in at the top for the monkey to sleep in. The monkey was chained to the pole with a belt around its waist. Patterson however advised against this set up, calling it ‘barbarous’ and warning that the monkey may ‘pelt you with refuse from his larder’ and ‘be objectionable’.

Patterson instead suggests a secure wooden cage with a wire front, but warns that extra wire should be added when housing a large monkey as they are apt to jump. Patterson advocates a trapeze to keep your monkey amused.

Recommending the best breed of monkey, Patterson says of the brown Capuchin: ‘As clean, well-coated, and least repulsive and objectionable pets, with very little of the dirty insinuations of the Catarrhines.’ He cautions against keeping baboons: ‘their large size, superior strength, subtle cunning, and often filthy practices, giving ample reason for exclusion from general favour.’

As for feeding, the author warns: ‘the monkey is a glutton’ and should not be let loose unfettered on the kitchen cupboards. Patterson instead endorses a diet of boiled rice and milk, bread and milk, and boiled potatoes ‘which are most highly prized by them’. He also highly recommends onions which he thinks are a good ‘cleansing food’, however he notes that ‘American monkeys detest the smell of an onion’. He goes on to recount that not all monkeys are satisfied with a vegetable diet and that on one occasion his pet capuchin got loose and killed a ‘fine macaw, and partly stripped it before it was recaptured; whilst an unfortunate canary was literally devoured alive.’

To tame your pet monkey and gain his trust the author recommends that you let a friend go up to the monkey’s cage violently brandishing a stick in order to frighten the animal. ‘In the midst of this nonsense, rush forward, and pretend to take the part of your pet, thrash your friend to within an inch of his life with the very stick he has been using, and put him out. Next take the monkey some savoury morsel, such as a date, or an apple, and sympathise with it. You are sworn friends from that time.’ 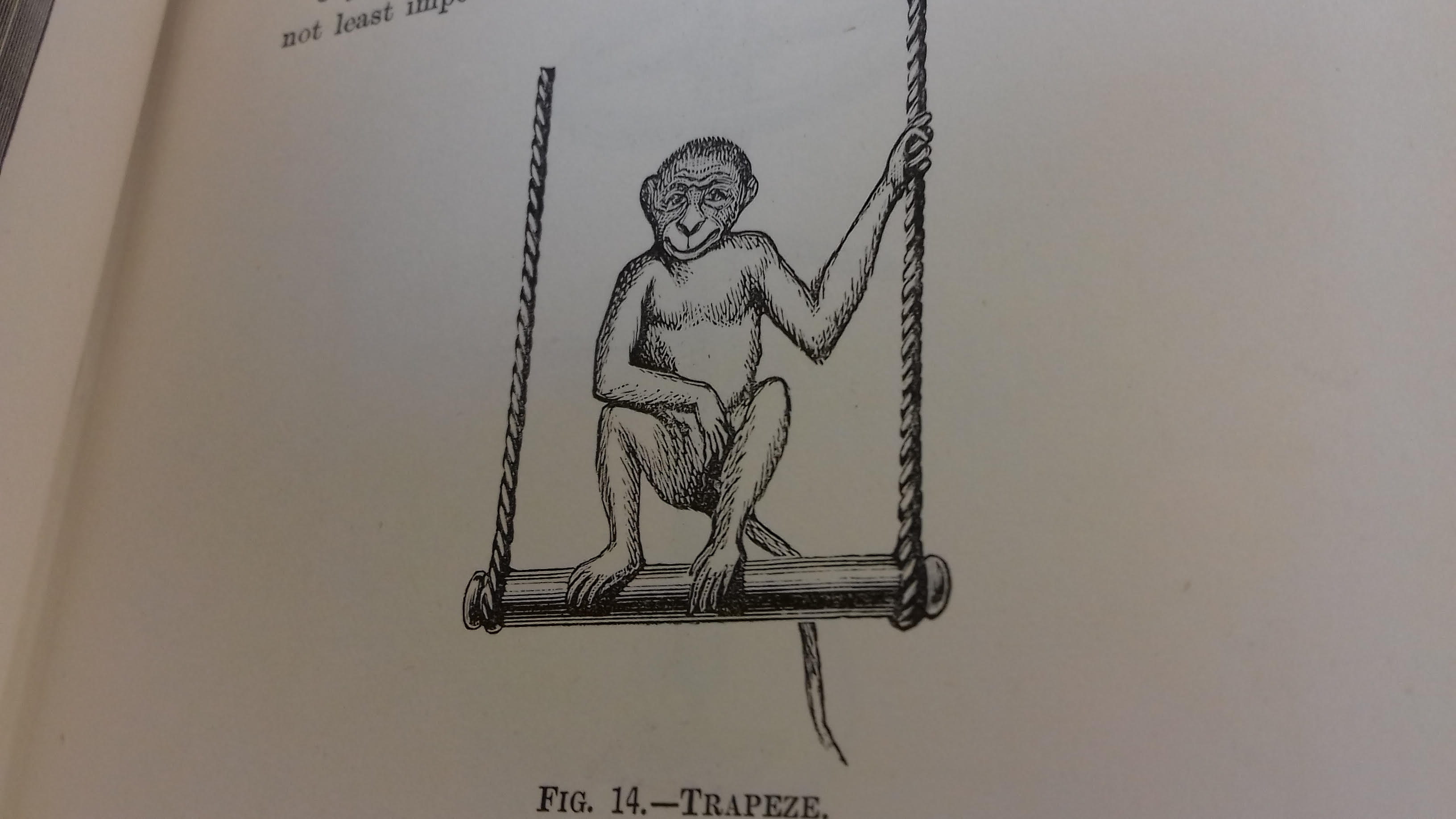 Patterson suggests that when your pet monkey dies, should their coat be in reasonable condition you might choose to stuff them and mount them for display. He goes on to describe, in quite some detail, the agonies of a monkey’s death:

The tail end of a monkey’s earthly career, as with all flesh, is its death. This is an exceedingly human-like affair, the little sufferer often holding its head in its last illness, and gasping pitifully for breath, turning its dulled eyes up towards its keeper with an expression that seems to say “What have I done?” or, “We all of us come, at last, to this!” I haven’t always had the heart to see the end of it all; for, when a monkey is past cure, the sooner its sufferings are ended the better. My method of giving the coup de grace may savour of the barbarous, but I know of no quicker or better way to finish off the poor wretch than by giving it a sharp, heavy blow, with an iron bar, on the back of the neck, just below its connection with the skull. But a bungling or nervous hand had better not attempt a job of this kind, for adding torture to its dying pangs is cruel in the extreme.

Although to modern readers keeping a wild monkey as a pet seems unnecessarily cruel, it is clear from Patterson’s closing thoughts that despite his misguided ideas he did have a genuine affection for monkeys:

Lastly, I would urge upon the reader not to neglect his little friend: to give him all the room and exercise possible; to provide him with a plentiful supply of clean, sweet food; always keep his domicile in a clean condition – in fact, in every possible way to make the little prisoner, who is entirely at his mercy, as happy as possible.