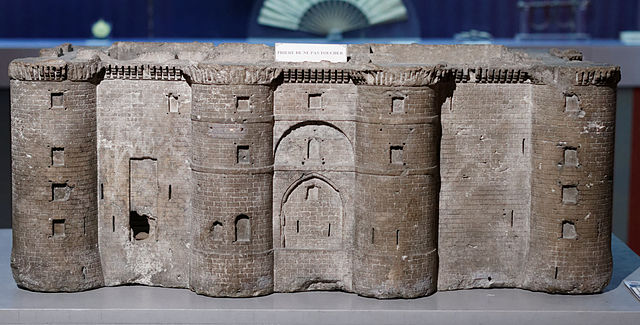 On 14 July 1789, in what would become a defining moment of the French Revolution, Parisians stormed the Bastille prison – a symbol of the ancien regime’s authority and despotism. Within days a local builder, Pierre-François Palloy, and his team of masons began to dismantle the old prison, taking away the stones, chains and debris, and leaving nothing but a space where this once imposing building stood. 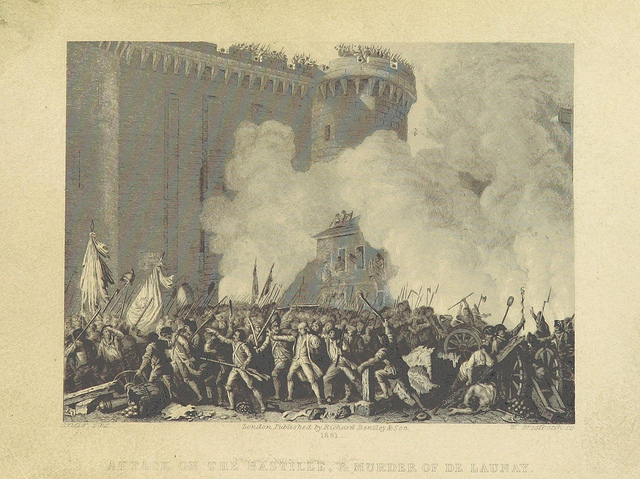 The Storming of the Bastille in The History of the French Revolution. Translated by F. Shoberl (1881) via The British Library

Palloy described himself as a patriot, self-identifying by signing his name ‘patriot Palloy’, and he chose to use the debris from the hated to prison to create a series of revolutionary relics. He used the stones to inscribe portraits of the king, revolutionary figures and the Declaration of the Rights of Man. He melted down the chains and cast medals of freedom. He even used the stones from the windowsill of the Bastille governor’s office to make a set of dominoes which he presented to the dauphin. Palloy used these stones as symbols of the revolution –  transforming a once despotic symbol into one of freedom.

The Bastille as a Symbol of Revolution

On 15 July 1789, the day after the storming, the newspaper Révolutions de Paris stated that the prison would be ‘entirely annihilated and, in its place, a monument to august Liberty will be raised’.[1] This indicates that the public immediately felt a need to memorialise and transform the space inhabited by the Bastille. The storming of the Bastille signified a moment when individuals came together against tyranny and were victorious – it signalled a huge shift in power.

Yet, very few people, in terms of the whole population of France, were actually present at the storming of the Bastille. Palloy recognised this, and saw the importance of the Bastille as a symbol of the Revolution and the opportunity it presented to amplify and spread the revolutionary message across France. By using the stones from the Bastille itself to create models of the prison, Palloy was forming portable material objects memorialising this momentous event. These models were then sent to every department in France, allowing people from all over the nation to feel part of this revolutionary moment.

The physical bulk of the prison had loomed large over Paris, and its destruction left a gap, both actually and metaphorically, that needed to be filled. Prior to the Revolution the monarchy had used a series of symbols, such as the fleur-de-lys, to lend themselves legitimacy, authority and allude to tradition. As the Revolution exploded into life, new symbols were required. These symbols came in many shapes – clothing, such as the revolutionary bonnet; monuments, such as liberty trees; and art, such as paintings of revolutionary figures. But where do Palloy’s objects fit? In his many speeches and pamphlets, Palloy defined his objects in a number of ways, embracing their multi-faceted meaning. He named them ‘reliques patriotiques’, which conjures images of sacred objects, and yet also plays on the idea that they are items from the past of historic value. He also referred to them as ex-votos (an offering to a saint or divinity) which again sacralises the stones. Additionally, Palloy called the stones ‘relics of freedom’, a name which recognised their new form and meaning.

The Revolution created a new political culture which saw groups of people who had not previously engaged with politics emerge, this meant that Revolutionary propaganda became essential, not only to commemorate the key events of the Revolution but also to unite people and spread revolutionary ideals. Palloy did just that by creating smaller, multiple models of the Bastille. He demonstrated his agency and mastery over the despotic prison by defeating this once huge building and recasting it, in smaller form, anew. At the same time, Palloy was treating these transformed stones with reverence, ordering that they be celebrated as symbols of freedom, and therefore using them to unite people in common purpose.

The Making of the Models

Palloy’s Bastille stones were not only direct relics from the Bastille, and therefore were witness to years of oppression, but they were also then transformed by the hands of revolutionaries themselves. Palloy’s models were collectively created in his workshop by masons who had actually taken part in the demolition of the prison. These men who had torn down the stones were now remaking them in a new image which embodied both the despotic past, and the idealistic revolutionary actions of the present, at the same time. This fact lent the stones a whole new level of meaning, a meaning which could only be communicated if people knew of the context of their creation. Palloy ensured the provenance of the stones were announced at each models’ unveiling. In a speech given to mark the arrival of one of Palloy’s Bastille stones in the department of the Cote d’Or, the president of the administrative assembly, Navier, alluded to their power of evocation: ‘At the appearance of this monument, they believe they see the sombre dungeons; the noise of chains strikes their ear; the long wails of the victims resound in their hearts: a salutary horror will keep away tyrants everywhere.’[2]

As the Revolution continued, and competing factions vied for ascendancy, there was a need to narrate and define the transformation of power. Not only this but an end point was required at which revolution would stop and the new society could emerge and move forwards. Palloy himself was clear that his intention with his revolutionary relics was to use them as symbols of liberty even as the dominant ideology shifted around him, in a speech to the Constituent Assembly in October 1791 he said: ‘I have immortalized every epoch of the Revolution with trophies that I have dedicated to freedom.’[3] A simple model of the prison would serve only as a reminder of the old order. Palloy’s models were the Bastille crushed and remade, their meaning transformed by the hands of the demolishers themselves.

Palloy: The Barnum of the Bastille

The speed with which Palloy swooped in and took control of the demolition of the Bastille and appointed himself as custodian of its rubble has led some to claim Palloy was hoping to commodify and profit from the fall of the Bastille. Tom Stammers even referred to him as the ‘Barnum of the Bastille’,[4] and it is true there was something of 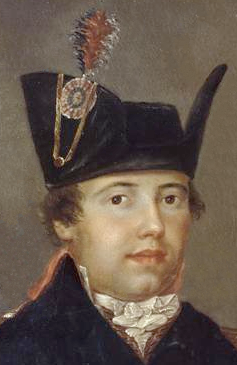 the ringmaster in the way Palloy managed the Bastille models and dictated their celebration and display. However, Palloy was not actually reimbursed by the government for the demolition of the Bastille until 1791/2, and between 1789 and 1799 Palloy published over 100 pamphlets and tracts of speeches, posters and designs for monuments he wanted to erect on the site of the Bastille, all at his own expense. In his 1794 autobiography Palloy wrote that the demolition of the Bastille, the distribution of the relics and the publication of his writings had left him financially ruined – which all attest to his life-long commitment to his vision of spreading the revolutionary message through his relics of the Bastille. When Palloy was mistakenly arrested and imprisoned by the Commune over alleged embezzlement, he clearly thought he might become a victim of the guillotine and, revealing his passion for the Bastille relics, he asked that he be buried under a Bastille stone inscribed ‘Here lies Palloy, who in his youth laid siege to the Bastille, destroyed it, and scattered the limbs of this infernal monster over the face of the Earth.’[5]

Today a number of Palloy’s Bastille models survive, some in museums, others built into the fabric of public buildings – their significance lessened by the passing of time, their curious provenance reduced to a historical footnote. Yet during the Revolution itself, thanks to the monumental efforts and vision of one man, these very same objects served to embody multi-faceted meaning. Palloy ensured through his speeches, pamphlets, festivities and parades that these multiple, miniature models of the Bastille could cast their Revolutionary message across France, to all levels of society. Their ability to represent past, present and future combined with Palloy’s talent for propaganda allowed these very simple objects to tangibly represent a victory over despotism.