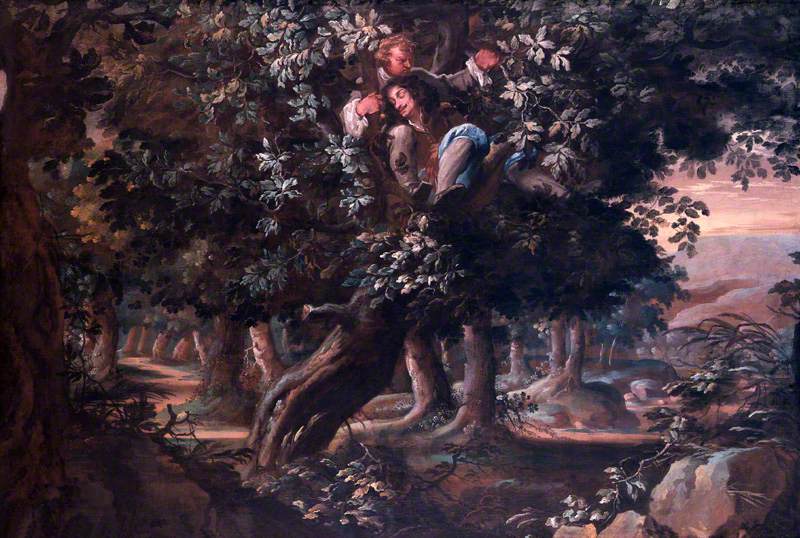 The Royal Oak and the Daring Escape of King Charles II

Numerous pubs across Britain are named The Royal Oak in recognition of the national importance of one large oak tree in Boscobel House, Shropshire.

On 3 September 1651 at the Battle of Worcester, Charles II, the newly-crowned King of Scotland and son of Charles I, was resoundingly beaten by Oliver Cromwell’s Parliamentarian army. Some 5,000 troops were killed or captured during the battle and 21-year-old Charles was lucky to escape with his life. Charles fled with a few of his most trusted men in an attempt to find safety.

Parliamentarian soldiers were in hot pursuit, desperate to capture Charles I’s son and prevent others flocking to the banner of the heir to the throne. By 3am on 4 September an exhausted Charles arrived at the converted priory of White Ladies where he sought refuge with the trusted Giffard family.  A loyal servant named George Penderel welcomed the bedraggled Charles and soon became a vital part of his escape plans.

It was immediately obvious that Charles needed a disguise as his long flowing locks made him instantly recognisable. Thus his hair was quickly shorn and his fine clothes substituted for a rough-hewn hemp shirt, green breeches, a dirty grey hat, a leather doublet and some badly-fitting shoes – to top off the disguise the house servants dirtied the young monarch’s face with soot. Now ready to depart it was clear that Charles needed a trusted guide. George Penderel’s older brother, Richard, was recruited to lead Charles through the local countryside and hopefully on to London, and they set out into the damp night.

The pair headed for some woods and hoped to reach and cross the Severn at Madeley, but they soon discovered the area was crawling with Parliamentarian troops and they were forced to turn back. As they walked back through the woods, Richard Penderel attempted to teach Charles to walk like a farm labourer, as his majestic gait gave away his identity.

With the area so closely watched by their enemies Charles and Richard decided to head for another house owned by the Giffard family, Boscobel House, where another Penderel brother, William was in charge. They spent the day hiding in a barn before setting out at night for Boscobel. After walking in sodden clothes for many hours, the tired and hungry pair reached Boscobel House at 3am, where they discovered one of Charles’s officers, Colonel Carlis was already hiding out.

As morning broke Charles and Colonel Carlis noticed a huge, pollarded oak tree in the grounds of the house which offered a promising hiding place. They climbed high into its branches, gaining a panoramic view of the surrounding lands, safely hidden by the canopy. With a picnic of bread, cheese and beer the fugitives refuelled and slept, the tree providing a solidly secure place of refuge. Thirty years later, when Charles was King Charles II he recounted the story of his escape to the celebrated diarist Samuel Pepys, who recorded the decision to hide in the tree thus:

‘he [Carlis] told me that it would be very dangerous either to stay in the house or go into the wood (there being a great wood hard by Boscobel) and he knew but one way how to pass all the next day and that was to get up into a great oak in a pretty plain place where we could see round about us for they would certainly search all the wood for people that had made their escape. … [We] got up into a great oak that had been lopped some 3 or 4 years before and so was grown out very bushy and thick not to be seen through. And there we sat all the day.’

At one point some Roundhead soldiers searching the grounds of Boscobel House passed directly under the oak in which Charles was stowed, but they failed to look up and notice their quarry above them. That such an important person as Charles chose to shelter in an oak tree was perhaps pure chance – oaks are England’s most common native tree and so would have been plentiful in the landscape. Oaks are also large trees with generous sprawling branches and abundant foliage, which would provide obvious comfort and coverage for any fugitive. Yet oaks, then and now, have a cultural significance as an enduring symbol of England. Ancient oaks were often used during the seventeenth century as places where couples would wed and traditionally celebratory Yule logs were supplied from the oak tree. Indeed it is with some irony that it can be noted that Charles’s father, Charles I was later tried and convicted in the beautifully oak-clad chamber of the Houses of Parliament – the tree of England the most obvious choice to hug the walls of the chamber of power at the heart of our nation.

It seems destined that such a tree should play a pivotal part in the rescue of the nation’s future monarch. Oaks have become so entwined with England, their solid beauty a cipher for the strength of the nation. Indeed oak trees played a vital role in Britain’s colonial success, providing the wood from which many great ships – for exploration and war – were hewn and proffering the oak charcoal required to smelt iron during the burgeoning Industrial Revolution. In 1664, John Evelyn, a fellow of the Royal Society published Silva or a Discourse on Forest-Trees, the first known book to express the theory that Britain’s success and resultant riches were founded on the back of the nation’s abundant oak forests. Evelyn’s great tome was to inspire recognition and respect for the power of the oak tree and encouraged in later years many wealthy landowners to plant huge forests of oak trees – most notably Colonel Thomas Johnes who in the period 1795–1801 planted some 922,000 oak saplings – to assure the future of the nation’s oak forests and thus its fortunes.

After spending all day in the safety of the tree, Charles and Colonel Carlis returned to Boscobel House where they rested for the night hidden in a priest hole before making their escape across country. Charles ultimately spent six weeks on the run before he reached the coast at Shoreham beach, where they set sail for the Isle of Wight and later landed in France, where Charles waited out Cromwell’s rule in European exile. In 1660 with Cromwell finally dead, Charles was able to sail back to Britain and reclaim the throne, restoring the British monarchy.

And so the safe haven of Charles and his companion, Colonel Carlis, became celebrated as the Royal Oak – the exciting tale of the king’s daring escape capturing the public imagination. Numerous pubs were named in its honour, and the tradition of oak-apple day was created, whereby on 29 May (Charles’ birthday) each year from 1660 the restoration of the monarchy was celebrated. A national holiday was granted and people wore sprigs of oak leaves pinned to their lapels to demonstrate their loyalty and support for their monarch and to recognise the part played by the oak tree in Charles’s escape and survival.

The Boscobel oak itself became a place of pilgrimage and sadly souvenir hunters were soon hacking off branches and tearing out sections of bark. By 1680 the tree had been so damaged a wall was built around its trunk for protection, but the effort was in vain and by 1712 the tree was reported to be in grave danger. Some traces of the original tree have survived, including a number of items which were fashioned from the wood cut from the Royal Oak, including a salver which today resides in the collection of the Bodleian Library in Oxford, a Royalist stronghold during the Civil War.  Additionally, the link between the Penderel and Carlis families to the famous tree was forever cemented by the creation of new Coats of Arms which depicted the Royal Oak and three royal crowns.

Today visitors can see the Royal Oak at Boscobel, but it is not the original tree, which sadly fell victim to over-zealous souvenir hunters in the seventeenth century. Instead the 200–300-year-old tree which today stands in its place is known as Son of Royal Oak as it was planted from an acorn of the original tree. In 2000, Son of Royal Oak was badly damaged during a storm, losing many of its large branches and in 2010 huge cracks were noticed in its trunk and the tree was fenced off for the safety of visitors. The importance and survival of the tree have been ensured by the planting of many saplings grown from the acorns of Son of Royal Oak (making them grand-children of the original tree) including a number planted near Boscobel House, such as one in 1951 planted by the fifth Earl of Bradford to commemorate the tercentenary of Charles’ escape. This ongoing link with the original Royal Oak ensures the oak still looms large in the nation’s collective memory as a symbol of the strength of the English monarchy.