Bygone ingredients in How to Skin a Lion

While writing and researching How to Skin a Lion I came across a number of bygone ingredients I had never heard of. I researched these obscure ingredients to find out what they were and where they came from so I could provide explanatory footnotes. Some of them are still in use but others have been replaced by synthetic alternatives.

Seeing as I have a bit more room here on my blog I thought it might be fun to take a little tour through some of these obscure ingredients and the stories behind them.

(in How to look after your hair)

Essence of Tyre, otherwise known as nitrate of silver or Lunar caustic, was used (somewhat unwisely) in Victorian times to dye the hair black (but 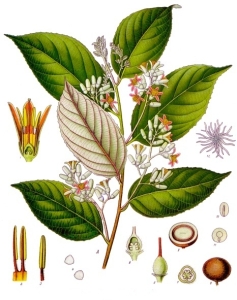 unfortunately it also ‘dyed the skin as well as the hair; it blackened the fingers; it burnt the linen on which it fell; and what was worse than all, it destroyed the substance of the hair.’)

This inorganic compound has the chemical symbol AgNO3. It was often used as a medicine due to its antiseptic properties. It was used by dentists to cure ulcers and by doctors to treat nose bleeds.

In the 1830s silver nitrate was used to treat epilepsy but had the rather alarming side-effect of turning the skin a blue/black hue, so it fell from use and was replaced by potassium bromide. There is a nice blog post here from The Victorian Clinic which discusses Wilkie Collins’ use of this treatment as a plot device in Poor Miss Finch (1872).

Today silver nitrate is still used in drugs for the treatment of warts or verrucas due to its corrosive properties, despite the Victorian advice on the uses of the compound I would strongly advise against putting it anywhere near your hair!

Saltpetre or potassium nitrate is a compound with many uses from fertilisers to gunpowder. Since the medieval times it has been used as a food preservative, today it is still used in some charcuterie.

There are many traditional methods to harvest potassium nitrate and most of them use manure or urine. The cave method relied on harvesting crystalised bat guano from caves, the French method utilised huge piles of manure mixed with ashes and the Swiss method involved collecting urine in a sandpit under a stable.

Thankfully in more modern times potassium nitrate is derived from nitric acid on an industrial scale, negating the need for any manure-based methods.

It is not so commonly used in food these days as it is not as reliable as other nitrates, but where it is used in the EU it is listed as the ‘E number’ E252.

Nitrate of potash (which is just another version of potassium nitrate, see above) which is fused together and cast into round moulds so as to look like little plums (or prunelle).

The withered rootlets of germinated barley created during the malting process. In this recipe the rootlets were used along with charcoal to cover the bacon in a chest to preserve it.

Today these rootlets (or malt-culm) are used in animal feed due to their high protein content (25%).

(or Benzoin) (in How to make lip balm)

The resin from an evergreen tree (Styrax benzoin) used as an astringent or antiseptic. It has a sweet scent, similar to that of vanilla and so was frequently used to make incense.

The resin derives from South East Asia and has long been traded into Europe for use in cosmetics, candles, incense (especially for use in Orthodox churches) and as an inhalant to clear the passageways.

Today tincture of benzoin is sometimes used by weight-lifters as an alternative for chalk, as a small amount applied to the hands can help create grip. It is still used by the cosmetic industry in some perfumes.

(or Styrax) (in How to make lip balm)

A balsam taken from the bark of the Liquidambar orientalis tree native to Asia Minor, generally used as a perfume or expectorant. Storax is mixed with benzoin to create tincture of benzoin.

It was used to treat skin conditions such as scabies.

(in How to make lip balm)

A wax found in the head of a sperm or bottlenose whale. It was commonly used in cosmetics and as an industrial

When extracted the oil forms into hard white wax which is oily to the touch and virtually odourless, this property makes it very useful in the manufacture of cosmetics and candles.

Whalers would extract the oil buy chopping off the head of a sperm whale and scooping out the oil and storing it in casks for transport back to land where it would be processed. A large whale could produce up to four tons of oil.

Once ashore the spermaceti would be filtered and boiled to remove impurities and stop it becoming rancid. The spermaceti was then stored in a cold place over winter which meant the oil congealed into a more viscous substance. This was then placed into wool sacks and squeezed in a press to remove the precious liquid oil. The remaining wax was then sold on as spermaceti wax.

More information on the process can be found in this great blog post, Dispatches from Pangaea.

At the height of the whaling era (roughly 1830-1870) up to twenty-two whales a day were killed for their blubber and oil. Nowadays modern alternatives such as kerosene are used, so no more whales need be slaughtered.

(in How to make British anchovies)

Gum dragon or tragacanth is the sap of a middle eastern plant it is used in food as a thickener and stabiliser and in medicine it is used for treating diarrhea and constipation (not quite sure how it can work for two such diametrically opposed conditions!).

Iran is the largest exporter of Tragacanth. It is made from the dried sap of the root of the plant. Alongside its medicinal uses the sap can be mixed with water to make a paste which is used in the tanning of leather, in traditional artists’ pastels and can be mixed with sugar icing to make sugarcraft cake decorations.

(in How to keep ants at bay)

Derived from the seeds of the Azadirachta indica tree, which is more commonly known as the neem tree in its native India and Sri Lanka. The oil has traditionally been used as an insecticide and as a remedy for asthma and arthritis. Margosa oil has an acrid smell and bitter taste and can be dangerous if ingested by young children.

(in How to preserve eggs)

Water glass or sodium silicate is a white powder that is soluble in water, creating an alkaline, first observed in the seventeenth century.

These days it is most commonly used as a glue to hold cardboard together and in various industrial uses such as reducing the porosity of concrete.

It was frequently used throughout the twentieth century for preserving eggs for up to five months. My mother remembers her mother using it in the 1950s as a way to keep fresh eggs.