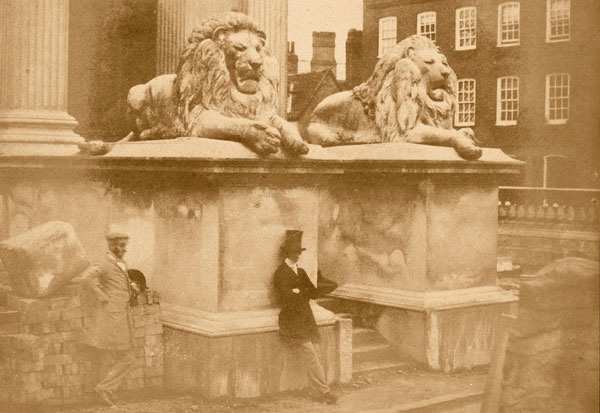 The Secret Life of Statues

As I was searching for local folklore for my customary dive into #FolkloreThursday on Twitter I came across the wonderful Enid Porter collection of local Cambridgeshire folklore, and it was here I discovered the wonderful story of the stone lions of the Fitzwilliam Museum.

That tweet seemed to capture the imagination of many people and I received some fascinating replies telling me about folktales of other stone lions or statues around the country which are said to come to life at night, and so I thought I should explore the legends further in a blog post.

These four beautiful stone lions were carved by William Grinsell Nicholl (1796–1871) in 1839 with two adorning the south steps and two looking out over the north steps of the museum building. Lion statues are a familiar motif on public buildings, their majestic and powerful figures seen as worthy beasts to guard entrances.

A Victorian photograph of two of the stone lions outside the Fitzwilliam Museum, Cambridge

Legend has it that at the stroke of midnight, the lions awake from their slumber, stretch and then pad down from their pedestals to take a drink from the guttering (flowing from Hobson’s Conduit further up the street) which runs along Trumpington Street. The lions might then take a stroll through the museum, letting out the odd roar, before settling back onto their perches ready to welcome visitors in the morning.

The story inspired Michael Rosen to write a poem called The Listening Lions in which he imagined what the lions might see and do when they awoke every night.

These gorgeous Art Deco lions guard the lesser-used north entrance of the British Museum on Montague Place. At midnight they too are rumoured to have a stretch, yawn and take a drink of water, before settling back into position.

The lions were carved by Sir George Frampton RA in 1914, he is also famous for the Edith Cavell memorial outside the National Portrait Gallery.

These four enormous bronze lions at the base of Nelson’s Column were designed by Sir Edwin Landseer. The Column was erected in 1843 and the fountains added in 1845, but there was some delay over the lions. The original commission went to Thomas Milnes but his four stone lions were not thought to be grand enough for the great memorial to Nelson and so they were sold to Sir Titus Salt who installed them outside the former factory school in Saltaire near Bedford, where they sit to this day.

Landseer, a renowned artist, took over the commission in 1858 and immediately began sketching the lions at London Zoo and he also took delivery (via a cab!) of a dead specimen from the zoo. Landseer was particularly thorough and the press began to complain that his research was taking overly long.

The lions were finally put in place in 1867, some nine years after Landseer had received the commission. The Spectator has this rather sniffy report about their unveiling (2 February, 1867):

Sir Edwin Landseer’s lions, so long ordered for the base of Nelson’s Monument, were uncovered on Thursday without any official fuss. The popular verdict upon them seems singularly uncertain, and the artistic one has yet to be pronounced.

The statues may look identical but if you look closely you can see that they are all slightly different. The paws on the lions have been criticised for not being very lifelike, resembling the paws of a normal cat rather than a lion, it is thought this is because the lion corpse he used to model from may have begun to decompose by the time he got them and so the paws were not in great condition.

The statue stands on the Market Square and it is said that when the church clock of Holy Trinity strikes midnight, King Billy gets off his horse and pops into the pub for a pint. If the clock ever strikes thirteen locals expect to see the horse also join them for a drink!

Do you know of any other examples of folklore of statues coming to life? If so, please do share in the comments below.

3 thoughts on “The Secret Life of Statues”