Writing often seems like a tortuous process, we tend to picture novelists hopped up on coffee, hunched over their laptops staring into space while their creative muse torments and then deserts them. However some writers subvert that image by churning out a book in the time it takes most people to get round to writing their shopping list.

Whether entering a drug-fuelled fugue state to get the words down, or simply creating a really, really long piece of paper on which to type, the following 10 writers have written a bestselling book in super quick time:

Ian Fleming was on holiday in Jamaica in January 1952 and, growing bored of spear-fishing and over-thinking his impending marriage, he decided he needed something to occupy his idle hands. Fleming sat down at the typewriter and began to write, dashing off 2,000 words every morning, until by 18 March the manuscript was finished. Fleming had no faith in his ‘adolescent tripe’ but fortunately for Bond fans everywhere, publishers thought differently and Casino Royale was published in April 1953, introducing the public to James Bond and marking the start a 14-book series.

Fleming stuck to his writing routine and most of his later Bond books were also written in under two months. When Birdsong writer, Sebastian Faulks took on Fleming’s mantle to pen Bond continuation novel Devil May Care in 2008 he too decided to adopt the speed-writing technique. Faulks’ previous book Human Traces had taken him 5 years to complete, so copying Fleming’s strict 2,000 word a day method was quite a departure.

2. As I Lay Dying by William Faulkner: 6 weeks

William Faulkner wrote his fifth novel As I Lay Dying over the course of six weeks while he worked the night shift at a power plant. Faulkner would start writing at midnight and finish as 4 a.m. the words tumbling neatly into place. So confident was he in his writing technique that he claimed he never changed one word from his first draft, despite the fact that the 59 chapters are narrated by 15 different characters.

Rider Haggard wrote King Solomon’ Mines in just 6 weeks after his brother bet him he could not write a book as good as Robert Louis Stevenson’s Treasure Island. Haggard proved his brother wrong as his novel became an instant bestseller and inspired many others to pen books in the new ‘lost world’ genre. Despite the speed at which it was written, King Solomon’s Mines retains an aura of reality as Haggard had lived and travelled in Africa for many years and as a consequence had ample source material in his memory banks.

King Solomon’s Mines was a huge success (although not as much as his next book She (1887) which went on to sell over 83 million copies) and part of its popularity can perhaps be traced back to the astoundingly good early reviews. Some 20 gushing reviews of the book were published anonymously in the press on publication in 1885 and it was only many years later that it emerged that they had all been written by Haggard’s good friend, Andrew Lang. 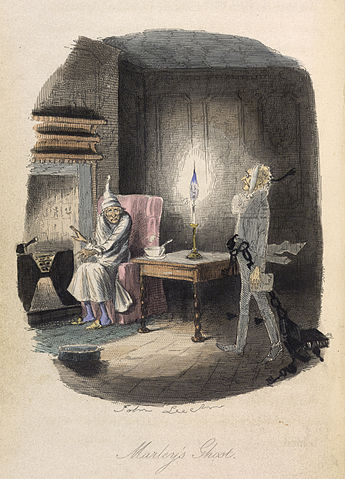 “Marley’s Ghost”, original illustration by John Leech from the 1843 edition via The British Library

Charles Dickens was a prolific writer and he was used to keeping to tight deadlines because his books were published weekly in serial form in Victorian magazines, however he excelled himself with A Christmas Carol, completing the work in about 6 weeks. Dickens started writing the story in October and worked intensely, occasionally taking breaks at night for a stroll through the streets of London, before finishing it at the end of November. The book was an immediate festive success and has since spawned numerous stage plays, movies and musicals, proving the enduring popularity of Mr Scrooge.

Although Kerouac spent a number of years formulating the ideas for On the Road, both in his head and in his journals, the complete draft was typed out in a manic three weeks. Kerouac liked to type fast and hated to be interrupted to change the paper in his typewriter, so before he started typing out his work he taped together numerous sheets of paper to create a continuous roll 120-feet long. This original manuscript is today preserved at the University of Indiana.

Anthony Burgess’s brilliantly dark dystopian novel A Clockwork Orange was written in 1962. Burgess liked to claim he wrote it in just three weeks, motivated only by money. The novel was hugely influential, a fact which was magnified by Stanley Kubrick’s film adaptation. Burgess himself did not approve of Kubrick’s film (he was especially annoyed that Kubrick ignored his final chapter) and referred to it dismissively as ‘Clockwork Marmalade’.

Although Burgess was best known for A Clockwork Orange he wrote a great number of other works over his career, ranging from nonfiction to plays, essays, poems and biographies. Burgess came to writing late in life after originally working as a teacher. At the age of 40 Burgess was given just one year to live after being diagnosed with a brain tumour so he began writing to try and leave some money for his wife. The diagnosis turned out to be wrong and Burgess continued to live and write until a different cancer (this time of the lung) really did finish him off aged 76.

Belgian writer Georges Simenon was extremely prolific, penning over 500 novels during his career, but he was best-known for his beloved detective Maigret. Simenon was an incredibly fast writer and could produce 6 to 8,000 words in one day and on average he would complete a novel in just 11 days. To continue to be so prolific Simenon stuck to a strict writing schedule, fuelled by pots of coffee, numerous tobacco pipes and wearing the same shirt for the entire period it took to compose the latest book.

Simenon became so famous for his speedy writing technique that when Alfred Hitchcock phoned him for a chat only to be rebuffed by his assistant as he was in the middle of writing a novel, Hitchcock was said to have quipped ‘Let him finish. I’ll hang on.’ 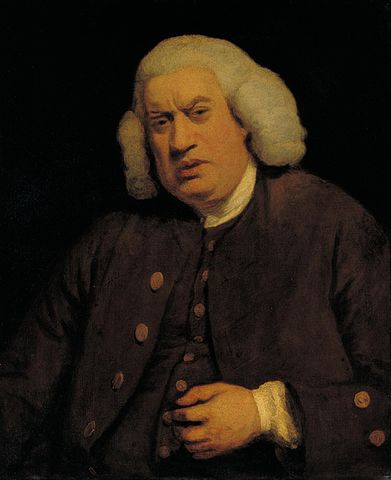 After the death of his mother, lexicographer Samuel Johnson needed to pay for funeral expenses, and in order to do so he did what every good writer would do – he wrote a book. Johnson sat and wrote every night for a week (no doubt taking the odd break to weep over his lost mother) until he had a completed novel. The resulting book Rasselas was Johnson’s only novel but proved to be successful enough to pay for his mother’s funeral.

Johnson’s life’s work was the compilation of A Dictionary of the English Language which listed some 40,000 words and took a rather more lengthy 8 years to complete. Although a great work for some puzzling reason Johnson’s dictionary contained no words beginning with the letter ‘X’. Under ‘X’ Johnson wrote: ‘X is a letter, which, though found in Saxon words, begins no word in the English language.’ He had a point as X-rays weren’t discovered until 1895 and Xanadu wasn’t released until 1980 …

Stevenson had long had the idea of writing a story based on the idea of a split personality but had been unable to find the right setting. Legend has it that Stevenson, desperately ill with tuberculosis and drugged out of his mind on medicinal cocaine fell into a drug-addled sleep in which the story of Dr Jekyll and Mr Hyde came to him. On waking he sat at his desk and in 3 feverish days wrote out the first draft. His wife, Fanny, on reading the completed manuscript thought it was drivel and threw it into the fire, causing poor Stevenson to spend another feverish 3 days re-writing the manuscript once again. Thankfully this version was kept from the flames and went on to be a great success, finally allowing Stevenson to pay off his debts.

Original manuscripts by authors are usually highly-prized and are often gifted to national libraries or universities associated with the novelist, however unfortunately over half of Stevenson’s manuscripts have been lost. Descendants of Stevenson in need of some cash after World War I, sold most of his manuscripts including Treasure Island and The Black Arrow which have sadly never resurfaced.

When John Boyne came up with the idea of his holocaust-based story The Boy in the Striped Pyjamas he was so inspired he sat down and wrote it out, barely stopping for food, drink or sleep. At the end of two and a half days Boyne was done. The Irish novelist had already written a number of other books but took a rather more sedate four weeks to complete those first drafts, however he said that with The Boy in the Striped Pyjamas the story just poured out of him. The book has since been made into a multi-award winning film.

If you enjoyed this post please check out my books, such as The Book Lovers’ Miscellany for more on books, writers and writing.