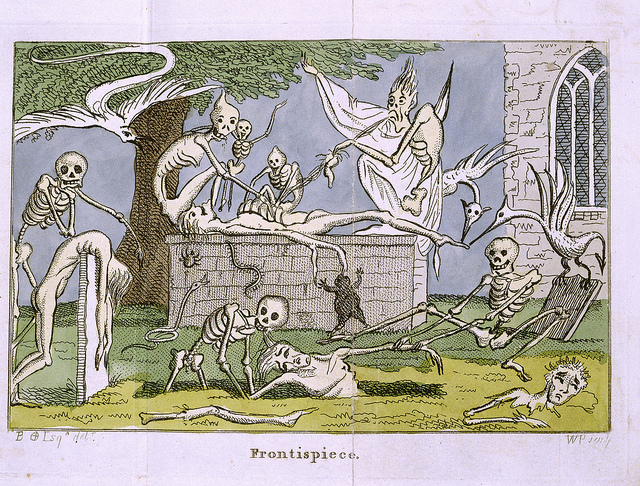 In the time before DNA testing, dusting for fingerprints and blood-spatter analysis proving guilt or innocence was a rather less scientific matter. Folklore, superstition and religion ruled.

The high German epic poem Nibelungenlied, written in about 1200, features a scene in which the dragon-slayer Siegfried has been murdered and his body laid out. When his murderer, Hagen approaches, Siegfried’s wounds begin to bleed afresh, indicating Hagen’s guilt. This phenomena was known as cruentation, whereby a victim’s body would react should the murderer approach, and before forensic science developed in the early nineteenth century, this was one of the many methods used across Europe for proving guilt .

From Tales of Terror (1808) via The British Library

The word cruentation comes from the Latin cruentatus, which means to ‘make bloody’. The method likely originated in ancient Germanic practices and from about 1100 spread across Europe. To carry out cruentation, the body of the victim would be laid out on a bier in the courtroom (hence the practice’s alternate names: bier-right or ordeal of the bier) in the belief that it retained some sentience after death. The suspect was then required to approach the body, perhaps circling it a number of times, or placing their hand upon it. If the suspect was guilty, the body would supposedly signal this by frothing at the mouth, bleeding from the nose or oozing from existing wounds.

In an indication of the pervasive nature of this belief, Shakespeare’s play Richard III (in Act I, Scene II) includes a scene of cruentation when Lady Anne confronts the murderer of King Henry VI, saying:

For ’tis thy presence that exhales this blood

In reality modern science has shown that from about six hours after death all the blood in a dead body would have congealed. The fluid which may have leaked from these dead bodies (let’s face it its likely they would have been jiggled about a fair bit when getting them into the courtroom) was probably what’s delightfully known as ‘purge fluid’ which is created in the early stages of decomposition.

Another method to uncover guilt was trial by ordeal. This was founded on the belief that God would protect the innocent from being falsely accused or intervene to show a sign of their guilt.

Trial by fire was used across the world in a number of different guises. The Indian epic poem Ramayana depicts Sita going through a trial by fire when Rama doubts her purity. Her innocence is proven after she stands in a circle of flames and remains entirely unscathed. Similarly in Europe the accused was often asked to plunge their hand into a fire to retrieve an object, or to hold a red-hot iron. Their innocence was proven as long as the wound appeared to be healing, rather than festering, within three days of the trial. 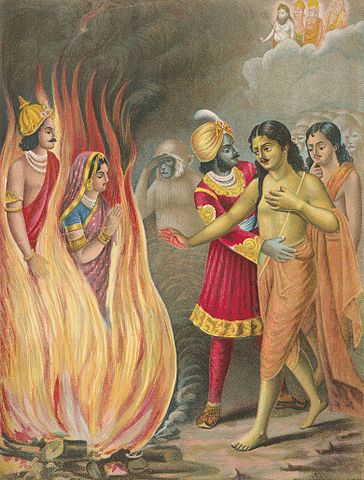 Sita’s ordeal by Fire via The British Museum

The most famous trials by water were seen in seventeenth-century Salem during the infamous witch trials. Here the accused were bound in the fetal position and thrown into a body of water. Those who sunk were deemed innocent and hauled out, those who floated were branded as guilty of witchcraft.

Witch-finding was a hotbed of superstition and a number of extremely dubious methods to extract ‘confessions’ or proof of guilt were utilised. This included: making the accused read aloud the Lord’s Prayer — any stumbling or mistakes and guilt was proven; bringing their bewitched victims before them and making the accused touch them, no reaction proved innocence whereas any ‘waking’ proved they had been under a spell; and ‘pricking’ supposed witches’ marks on the body of the accused, if they showed no pain, they were guilty.

In 1215 Pope Innocent III banned priests from cooperating with any trials by fire or water, a ruling which helped the practice to become less frequent in Europe, but witch trials during the fifteenth and sixteenth centuries saw the practice revive and it did not truly die out until after the American witch trials of the seventeenth century — indicating the extent to which folk belief pervaded all levels of society.

If you enjoyed this post do check out my books for more on arcane history, books, words and libraries.