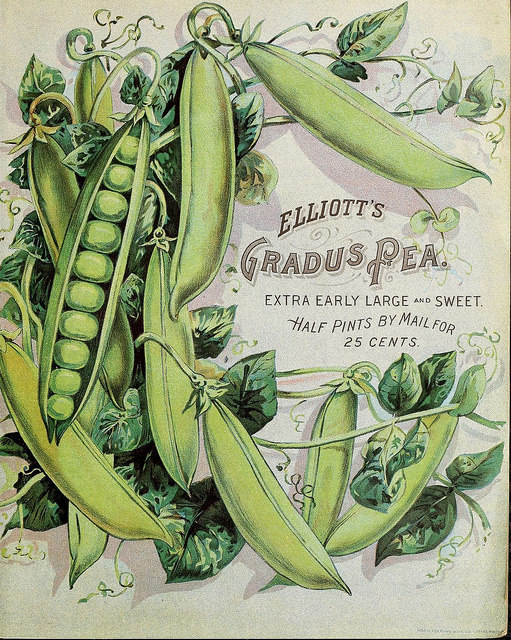 Gardening folklore often has a basis in fact, so it is fascinating to read through some of the old traditions and superstitions surrounding plants, planting and gardening. I have always enjoyed joining in with the #FolkloreThursday hashtag on Twitter each week, sharing snippets of folklore I come across while researching my books and articles.

For the last few weeks I have been tweeting on all things gardening to celebrate the upcoming publication on 4 May of my next book The Golden Age of the Garden and so I thought I would collate the best bits of gardening folklore to share on my blog:

Plant a single garlic clove next to your roses to protect them from flying insects, especially pesky aphids.

Water collected in the hollows of ancient oak trees was thought to be a good remedy for fever.

Never bring dandelions into the house, they will make you wet the bed.

Cow parsley is also known as ‘break-your-mother’s-heart’ and it is bad luck to bring into the house.

Pick blackberries before September is out as by October it is believed the devil pees on any remaining fruit!

In Appalachian folklore it is considered extremely bad luck to say thank you if someone gifts you with plants or cuttings.

Daisies keep fairies from your garden. To ensure your child is not stolen and replaced with changeling, tie a daisy chain around their neck.

In Midwest America if a girl found a blood-red corn in among the yellow ones, she would be married within the year.

Brambles in seventeenth century England were considered magical, if you stepped under a thorny arch it could cure any ailment.

Foxgloves were considered bad omens. Sailors beware! Bringing one on board a ship was especially unlucky.

Planting and sowing of seeds should be done according to the phases of the moon:

In the moon’s first phase crops that bloom above ground, such as corn, spinach & lettuce should be planted.

The second quarter up to full moon, above-ground seed crops should be planted, such as watermelon, squash & tomatoes.

The week after full moon is time to plant below-ground plants such as carrots and potatoes.

In the final quarter of the waning moon planting should be avoided altogether, and instead weeding should be priority.

Chilli peppers will turn out more spicy if you plant them while angry.

When shelling peas if you have 9 in a pod, throw one over your shoulder for luck.

Parsley and basil will only grow well if you swear profusely as you plant it.

Old American folklore recommends that corn should be planted when oak leaves are the size of a squirrel’s ear.

Daffodils should be discarded before the head droops, a droopy daffodil is a harbinger of death!

Plant wild garlic to keep out rabbits, according to English folklore they will not pass a boundary planted with ‘ransomes’.

Parsley is especially tricky to germinate so gardeners would make 3 sowings, 2 for the devil and 1 for the gardener.

Do you know of any gardening folklore? Please share in the comments below.